Yes, I promised in the end of the last (which was the first) blog entry that I will tell some details how to install the worker but it would be worth to give some time to the architecture (the main reason of this is that I have a picture about the architecture that I want to share; also the previous blog entry didn't contain any image...)

So first let's see the diagram: 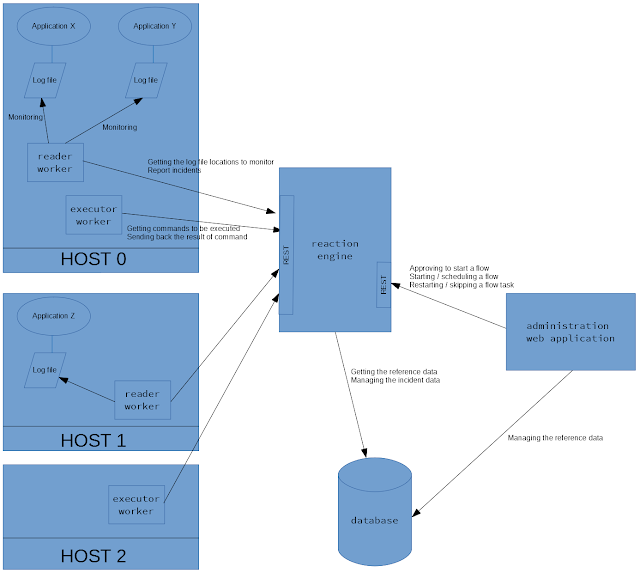 The HOST 0, HOST 1 and HOST 2 are the machines where the observed business applications are (more precisely where the log files of the applications are). As you can see the reader worker (the one that observes the log file(s)) has to be started on those machines only where the logs reside. Also the executor worker (the one that executes the OS command one by one) has to be started on those machines where operating system commands have to be executed. The workers are JAVA (JDK 8 is needed) applications. There is only one worker installation pack but there are different start/stop commands for the executor and the reader.
The reader worker calls 2 REST services:
The executor uses the following 2 REST services:
If a new log file has to be monitored on a host where the reader worker already works then all has to be done is to define the data in the management we application and the log file location will be synchronized automatically and the log file will monitored out of the box.
HMAC authentication is used when the call is made. It means that the hash is not static (it is made of the password, current date, used HTTP verb, endpoint, etc.) i.e. it cannot be decrypted. The username and password must exist in the worker and in the Reaction Engine too. The authentication is mandatory.
The HTTP message can be encrypted which can be based on the username and password (which is used in HMAC authentication) or on public / private keys in certificate. The advantage of this encryption over HTTPS is that no need to rebuild the secure channel if the message goes through network devices.

The Reaction Engine is a Java web application (JDK8 is needed) that can be deployed on Tomcat 8, on Wildfly 10 or on Weblogic 12c (separate WAR files are provided in the download section).
What it does is as follows: